Tigers are considered to be the largest cat species to roam the Earth. Beautiful and feared at the same time, tigers are known for being very dangerous – not once did it happen for these ferocious hunters to kill human beings who were not careful enough. If you are passionate about tigers, then here you will find several interesting facts that you should know about them: 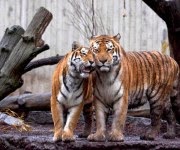 10. These Felines Come In Many Different Colors

Although you may be tempted to think that all tigers come in the typical orange and black coloration, their color can actually vary from white and gold to even black, in some cases. This has something to do with the hair color genes.

9. Tigers Can Eat Up To 25 Kilograms Of Meat Per Day

Tigers are big cats and their stomachs can accommodate no less than 25 kilograms of meat within 12 hours. Although they seldom eat more than 5 to 10 kilograms of meat at once, they can eat up to 25 if they are really hungry, and sometimes they need several days to finish eating their prey if the kill is big enough. However, if they do not finish eating their prey, they often cover it with leaves to prevent other scavengers from feeding off of it.

Unfortunately, at the time being tigers are considered to be endangered species, mainly because of the fact that hunters killed them close to extinction for their fur. At the same time, their natural habitat has been dramatically affected by human activity and this has also decreased the number of tigers around the world. Statistically speaking, there are only several thousand lions left in the wilderness, as most of them are held in captivity. Currently, their status is critically endangered as the total number of wild tigers has dropped by more than 90% over the past several years.

7. Tigers Can Mate With Lions And Produce What Is Known As A Liger

Generally speaking, tigers are solitary and territorial animals that can mate with lions and result in ligers. In a nutshell, a liger is a hybrid species that results from the mating of a female tiger with a male lion (or vice versa), a thing that is extremely rare nowadays and happens mainly in captivity rather than in the wilderness.

As you may know already, some tiger subspecies are heavier than others – taking the well known Siberian tiger as an example, it must be said that the male Siberian tiger can weigh up to 650 pounds, while the female can weigh only half of the total weight of the male tiger. On the other hand, there are smaller tiger subspecies where the female weighs around 150-200 pounds and the male seldom exceeds 250 pounds.

If you have seen a picture of a white tiger on the Internet, you have certainly asked yourself whether that picture is real or it has been Photoshopped. The answer is that white tigers do exist, in spite of being extremely rare nowadays – the white coloring of the tiger’s fur is actually a result of a rare genetic mutation that is often accompanied by severe health problems, unfortunately.

4. Unlike Cats, Tigers Actually Love And Know How To Swim!

If you own a cat or you know somebody who does, then you surely know that cats hate waters and are actually afraid of it – however, this does not apply to these large felines who not only love water, but also turn out to be great swimmers! Wild tigers often jump in lakes and rivers to relax during the hot summer days, as this is one of the few options they have to cool off. Moreover, some of them are so strong that they are even able to carry their prey through the water, all the way from one shore to the other one.

3. There Are Six Tiger Subspecies At The Moment

Although there were initially nine tiger subspecies, now we only have six: the Bengal tiger, the Siberian tiger, the South China tiger, the Indo-Chinese one, the Malayan and the Sumatran tiger, the latter being one of the smallest ones.

2. Their Eyes Are Round And Big

1. Tigers Mark Their Territory With Urine

As mentioned earlier, tigers are highly territorial animals and they try to mark their territory the best way they can, and they usually do that by scratching the trees and then using their urine, which has a very strong smell.